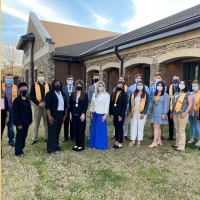 There are nearly 1300 chapters in nine countries, and the Alabama Region won awards for college readiness and inclusion. To commemorate Lee Conerly’s service to PTK, Phi Upsilon presented her with a plaque and plant. She commented, “As a member of Pi Psi chapter and advisor for Phi Upsilon, I know first-hand the benefits PTK affords its members and advisors. It has been my honor to serve the college as a PTK advisor, and I look forward to all the things our chapters accomplish in the future.”